Shaina Silva is a Haitian/American who has made her mark as an entrepreneur. She was awarded the “30 under 30, Emerging Leaders Award” as well as “The Shelby Cullom Davis Entrepreneurship Prize. Shaina is an ecosystem architect who has lived and worked in Lagos, Nigeria designing and implementing a range of programs that train and fund youths.

SHE_BUILDS Global Initiative was founded by Shaina, in June 2018, as a community platform that exists to unite, empower and connect Haitian women around the world in hopes of moving Haiti forward. Shaina shares with us a bit about her background and also explains the importance of this platform and what she hopes to gain from this.

1. Could you tell me about your experiences growing up in both Haiti and the United States, how do you think this has moulded you?

I spent the first 10 years of my life in Haiti, and this made me very attached to the country. French and creole were my first languages, and rice and beans and avocados were my first culinary favorites. As a child, I deeply enjoyed the simple things that life in Haiti had to offer: good food, good beaches, fresh air from the mountains, and quality time with friends and family. We didn’t have amusement parks or arcades to go to for leisure, so having a good time meant going to someone’s home, or meeting at the beach or a restaurant. This made me appreciate spending quality time with people and building a sense of closeness through conversation and storytelling.

Most impactful in my childhood however was growing up with an entrepreneurial family. My grandmother owned a flower shop where she made arrangements for communions, weddings, birthdays, and funerals. I spent a lot of time in that shop helping her, and making some of the arrangements, so by default I became an artisan and learned to tap into my creative side at an early age. The flower shop was on the top level of our house, so I would come home from school and go straight to the shop, and spent many weekends there building things with her and her little team of ladies whom she trained.

My grandfather owned an art gallery, and spent a lot of time promoting Haitian art and culture abroad. He created a little artist studio in our backyard, and would invite local artists who had limited resources to use that space to practice their craft. Every now and then he would feature one of the artists in his international exhibits. I would often sit in the studio amongst them, and they would teach me about colors and paintbrushes, and how to turn my imagination into artwork. Overall, my experience in Haiti turned me into the maker, designer and builder I am today.

I moved to the US reluctantly, but the political turmoil in Haiti at the time made it unsafe for my family to continue living there. My parents opened up a boutique consulting firm and became contractors for the US government. I spent manny summer vacations working as a receptionist at their little office, and after college, came onboard as one of their consultants. When we moved to the US, I became more aware of my family’s social activism. My grandmother would host events and award ceremonies for the community of Haitians in the DC area, so I came to meet.

Many successful Haitians who were in business or government. I didn’t enjoy it at the time because I was responsible for sending out hundreds of invitations, designing the award plaques and getting them made, and then greeting people at the door. I would have preferred hanging out with people my age. But I came to appreciate this sense of community that my family fostered through their initiatives, and today I can see how this early exposure groomed me to be the person I am today.

2. You seem to be very passionate about women doing something positive for their community is this because you have always had good female role models?

I’ve always been surrounded by positive role models, including my mother and grandmothers who are entrepreneurs, activists, and philanthropists. These women do it all, and have always taught me to be self-sufficient and to be an active contributor to society. While my natural inclination towards community building was in large part groomed by the influence of these women on my life, my passion came from observing human behavior and thinking critically about whether our existing systems were designed to benefit everyone equally.

As a futurist and systems thinker, I often look at how things are today, and how they could be tomorrow, and five/ten year from now by playing out different scenarios in my mind. Our present systems were not designed with women in mind, and yet, there is so much that women bring to the table when given an opportunity. So my passion comes from recognizing this inequality in our systems, and actively working on designing new ways to bridge those gaps.

3. Could you tell us what it was like working for an innovation hub in Nigeria?

Working in Nigeria takes grit. So my experience was both exciting and challenging. I had the opportunity to work closely with the public and private sector, and design programs to facilitate the growth of the entrepreneurial ecosystem in Nigeria. This meant designing curriculum for training entrepreneurs on how to start and grow a business, launching an Africa startup Academy, building incubators inside of universities, hosting presidential demo days and international pitch competitions, and matching entrepreneurs to a global network of mentors. Exhilarating work! I love being around problem solvers and change makers, and working in that space allowed me to experience Nigeria from the perspective of those who are actively looking to innovate their industries and move their country forward.

The biggest challenges came from weak infrastructure and poor government policies that would often create setbacks while trying to move things forward. I witnessed poor government policies and corruption lead to the destruction of well running small businesses, and entrepreneurs having to start all over again as a result. I’ve witnessed the same happen in countries with similar socio-economic make-ups,

like Haiti and Brazil, and it can get discouraging…. but we continue to move forward.

There are a number of things that need to work together for this to change, and I believe that the strength of community networks combined with the influence of media and technology will play an important role in this.

4. I noticed you have also been involved in other projects concerning Haiti, what were

Outside of #SHE_BUILDS, I am also involved in other initiatives aimed at developing Haiti’s entrepreneurship and innovation ecosystem. One of these initiatives is

called WOCO, which is a platform aimed at connecting the global diaspora to the startup ecosystem in their home countries through immersive experiences. Many Haitians living outside of Haiti have very little connection to the country either because their parents warned them never to go there, or because they’ve never had an opportunity to visit and build their own connections, despite having the desire to do so. WOCO is created to facilitate just that: organizing immersive cultural and business experiences for the diaspora and the broader international community to effectively contribute to the growth of the local business ecosystem.

And of course, we’re using technology to facilitate this exchange and make it easy to find the right experiences and the right startups on the ground to connect to and contribute time and talent to. In a major way, we’re addressing the problem of an untapped generation.

In addition to WOCO, I also sit on the board of Banj, an entrepreneurship hub based in port-au-prince, and FOTOKONBIT, an organization that equips young people with skills in digital photography such that they can be the ones to tell the stories of their community and ultimately share a different narrative about Haiti.

5. What made you create this platform #SHE_BUILDS Global Initiative?

This platform emerged as an accident. I was working on a personal project called “visions for Haiti” and decided to launch it on international women’s month, and feature the first few visions submitted by Haitian women. It was upon sending a thank you note to all the women who submitted their vision for Haiti that the disruption began. The ladies were so excited by the idea that they could now read one another’s vision for Haiti, and know who is working on what, and who is based where, that they were eager to meet one another and asked me if the follow up to this project would be some sort of event that would allow them to all meet in person. To their disappointment, that was not my intention. I was simply sending a thank you note for contributing to my project and sharing their vision for Haiti with the world.

However to honor their feedback, I decided to organize a digital meeting and allow them to discuss some of their ideas, and some of the challenges that women faced in our community that have yet to be resolved. We discussed a long list of challenges during that call, and being the problem solver that I am, I could not rest until finding a solution to address at least one of them. Immediately after that call, I took a trip to Haiti to launch an accelerator program for tech entrepreneurs. Only two women were represented in the group of 10 companies that were selected. From that point on, I began doing more research on the needs, and asking more questions to women both in Haiti and across the diaspora.

Ultimately, every person I spoke to agreed that there was a need for a platform that focused on connecting our community of women, and amplifying our voices, so that’s what I decided to build. However, I decided to take a step further: not only addressing the need to connect to one another and increase our collaboration, but also increasing the participation of women participating in building products, services, and systems that would allow our community to thrive.

6. What do you aim to achieve with #SHE_BUILDS Global initiative?

Through #SHE_BUILDS, I envision connecting Haitian women across the globe and facilitating their engagement in the social and economic development of our nation. To achieve that, we need more women to have a seat at the table, whether in business or in government, and so creating a powerful global network can give us leverage to move the needle in the right direction.

In a first phase of this vision, my aim is to organize the community. We can move faster when we are organized and have clear channels for communication. For that, I’ve been able to establish 14 chapters across the globe, with the goal of eventually having a chapter in all the major cities in the world (currently recruiting ambassadors for Paris, Lagos, London, Beijing, Tokyo, Rio, Sao Paolo, and Dubai). In an interesting way, this would look like a United Nations for Haiti by Haitians.

In a second phase, I envision partnering with embassies worldwide, and creating linkages that would allow more Haitians to access global market opportunities, and our chapter ambassadors to lead the charge. Haiti would no longer be geographically isolated as it is now in its current positioning in the Caribbean.

Instead, we would have the entire global community of Haitians working together to improve quality of life for Haitians. If we are able to increase social and professional capital in our network, and we are able to tap into it with ease at any given moment in time, then we can accelerate the speed of our progress and experience transformation in this generation (within our lifetime) , and blaze the trail for generations to come. 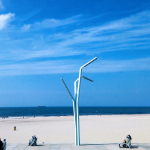 Amanda Azubuike, a woman of Nigerian descent, has been promoted to the rank of Brigadier General in the United States...